This post I will talk about my best work from trimester three.

My first work from trimester three will be my LA Wordly Wise test
This Wordly Wise test was one of my best. I know this because I had studied for it all week.
Here’s the picture 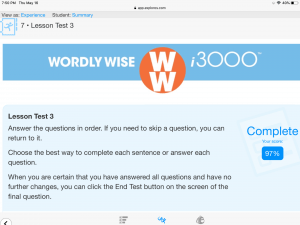 My second work from trimester three will be my Math Magazine (graded)
This Math Magazine was really difficult for me but I stayed up all night trying to finish this. To my surprise my hard work payed off and I got a hundred percent.
Here’s the picture 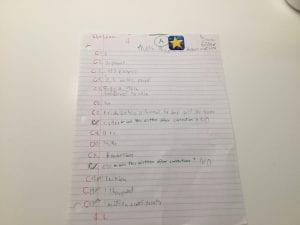 My third work from trimester three will be from Social Studies my Preserving Jar project.
I feel like this is one of my best work every because I researched it really well and I had gotten a good grade on it too.
Here’s a link to my slide show. Click here

My fourth work from trimester three will be from science Build an Atom.
This class was a tricky one because I was originally going to do another project called Too Hot To Handle Exploration that we did four months ago. But my teacher still hasn’t graded it so I couldn’t have used it. This other work was a worksheet that I did pretty well and I was proud of myself.
Here’s a picture of the worksheet. 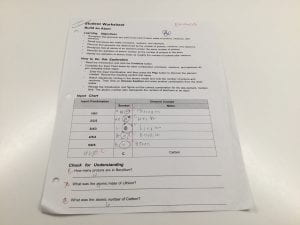 (I am so sorry for the bad hand writing).

The final work from trimester three would be my Japanese Katakana Pop Quiz.
I choose this test because I felt like it was my first Japanese pop quiz and I did really great job on this test.
Here’s the test.

This week I will be reflecting on my second ever SBC. I feel like I liked the other SBC better just because it was more fun. I feel like i really improved over the last SBC.

I only wrote four posts (including this one) over the past 10 weeks. I participated in a total of four weeks and I got a SHOCKING zero comments. The post I most enjoyed writing was my Music post because I really liked using the Chrome Music site. I also really found interest in researching Freddie Mercury from Queen. The next post I really was fond of writing was my About My School post. I really liked writing this post because I really liked writing about embarrassing stories and I really felt like this post really expressed myself.

I don’t think that I used any web tools to help me in writing my blogs. My plans for my blog will be That I will not be posting anymore until I have to. The thing is that I’m going to a different school next year and I doubt that they do it to. That will be all for this week’s post. Bye!!!

This weeks blog assignment was a free choice and I chose to talk about my first Jiu-Jitsu tournament.

In my first Jiu-Jitsu tournament I was only able to compete twice. But I will be talking about the whole day. The day started off with waking up at 6:00 AM then going to the gym where the tournament is at. I got there at 7:00 and I still needed to weigh in. (Just in case you guys don’t know A weigh in is when you weigh yourself and they place you in a division they also count your age). So I waited in line for like 45 minutes to get to the weigh in’s. I finally got in and I had my fingers crossed that I wasn’t over 80 Lb. If I was I would be the lightest in the division. I was 78.9 Lb and I was so relieved.

My dad checked the time of my match. It was at 2:00 PM, so we went to eat at Taco Del Mar. That took about one hour. Then we went to Target and I got a icee and popcorn. When we came back I had found out that my fight was pushed back to 3:00. So all I did for the next three hours was talk and play with my friends.

Then I hear my name being called on the P.A. system and I instantly looked up and changed into my gi.  I went to the referee table and waited for the matches before me to end. Then I bowed in, and the match started.  I advanced to the next round. I changed out of my gi. When I came back from the changing room my coach told me “ Where were you, your match is starting!”  So I changed back into my gi. Out of breath because my first match just ended and when my next fight started I…umm… ya skip to the end I had lost and I was disappointed. But at least I got second place overall in my division in this tournament. (I really wanted first because they got a real authentic samurai sword). Anyway I still got a medal and stood on a podium.  Thank you for reading.

Here is my first match click here ( I’m the one in black and green). 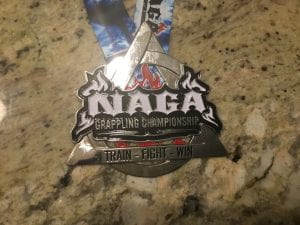 Here is a picture of my second place trophy.

For this week’s post we had to write about music. We had multiple prompts that we could choose from. We were supposed to choose two out of the eight. So I chose eight and four, which are make your own music and research an artist or group.

Make Your Own Music:

This is the song I made.
Click here to listen.

Research An Artist or Group:

The group I researched was Queen. I chose to research Queen because I love their music. Some of their most popular songs are We Will Rock You, We are the Champions, Another One Bites the Dust, and my personal favorite, Bohemian Rhapsody. The lead singer was Freddie Mercury. Freddie was born in 1946 in India, then moved to England in 1964. Queen formed six years later in 1970. They played rock, but in 1975, they made an opera/rock song called Bohemian Rhapsody. It was a huge hit and they kept making more and more songs, until 1991 when Freddie died from HIV/AIDS. If you are interested in learning more about Queen, watch the movie Bohemian Rhapsody. It gives you so much information about the band and Freddie. Thank you for reading.

This week, we had to write about our school. Our objective was to choose two out of the eight tasks. I chose two and four. They are Share Your School and What Happens at Break Times.

How I Get To School and About My School:

I get to school by car. My mom and I live really close (within walking distance) so I don’t have to wake up early. My dad, on the other hand, doesn’t live that close. We live all the way in Hawaii Kai, so the drive is about 30 minutes. The school I go to is called Honpa Hongwanji Mision School. It is a Japanese school, so we do have to learn the language, but not fluently. We have seven periods: four main classes and three resource classes, which include electives. I favor choice electives because we get to choose the class. This trimester I got movies, which is the best choice elective because JUST LOOK AT THE NAME!!!

What Happens at Breaks

During breaks (or recess and lunch), we will usually talk and play on our devices. If we are SUPER bored, we will play basketball, tag, or soccer. At lunch, we will do the same thing. I think the most fun I ever had at recess was when I was in fourth grade and I brought banana tag to our school. It was so fun because at first it was just me and my friends, then it was the girls, then the fifth graders, then the middle school. It was so crazy until the cheaters came and ruined the game. But, they weren’t the reason the game was banned. It was THE SLAP. So basically THE SLAP started with a girl (we’ll call her Jessie). So this Jessie went to tag someone (me) and I ducked and she went flying into the fence. She didn’t get hurt. I knew that because she got up and went after me, but I was too fast so she went after someone else. She was mad- like mad mad. Then she went to tag the other kid but I guess she put a little too much force and slapped him. After that, the teachers banned banana tag from our school because he told his parents and yaaaa.
There’s another story about a school game that was banned because of me, but you’re gonna have to wait for another time. For now I’m signing off. BYE!!!

This post is about my best work from Trimester 2.

I choose this because I had gotten a 100% on the test. I worked really hard on it and the work payed off. 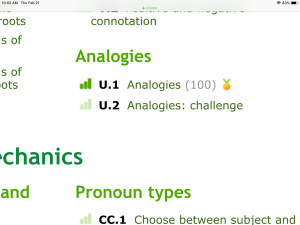 I choose this test because I had only gotten one wrong and I thought it was very difficult. Seeing as other people failed. I was so relieved that I got a good grade because I was a little bit below average on my grade so it gave me a boost.

I choose this one because I had worked all night on it and got an A on it. I felt a feeling of relief.
Click here to go to it

I choose this one because I did it all by my self I had no help. While everyone had a partner I didn’t and I still completed it. I even got a good grade on it so that was awesome.

I choose this test because I got an A on it and I studied for it. The Best part is that I am really bad at Japanese. So I was really proud of myself for getting a good grade on it.

Clash Royale is a strategic multiplayer game made by Supercell.  Supercell also made other popular games like Clash of Clans, Brawl Stars, and Boom Beach. My friend Alex also made a post about Clash Royale. Click here to visit his blog. I had played it for only two years and then I deleted it because I didn’t have enough storage. Starting off and when in the big leagues is the hardest part. Some tips for Clash Royale are to save elixir and don’t waste it. Another tip is to always put a tanky card (a card that can take a lot of hits) first and in the back so you could save up elixir and then start a push to take the tower.

This week I want to write about my BIRTHDAY!!! Last week Thursday was my birthday and I had a blast. First, I had school I was sang happy birthday but sadly I didn’t pass out snacks. When I was going home I was met by a 100 dollar gift card and some clothes from my uncle. He told me we were going to Tanaka of Tokyo. After we ate, we went to Ala Moana for a giant Cotten candy. Finally, we went home and went to sleep.

After the week was over I had a sleepover with my best friend Jayce and Alex. Click here for Alex’s blog.  We went to a hotel called the Hyatt. All we did that day was play fortnite.Alex had to go at 9:00 P.M. So it was just Jayce and I now. We played until it was 4:00 A.M. The next day we went to a spaghetti restaurant called Spaghetti Factory. Then Jayce had to go and my birthday party was over.